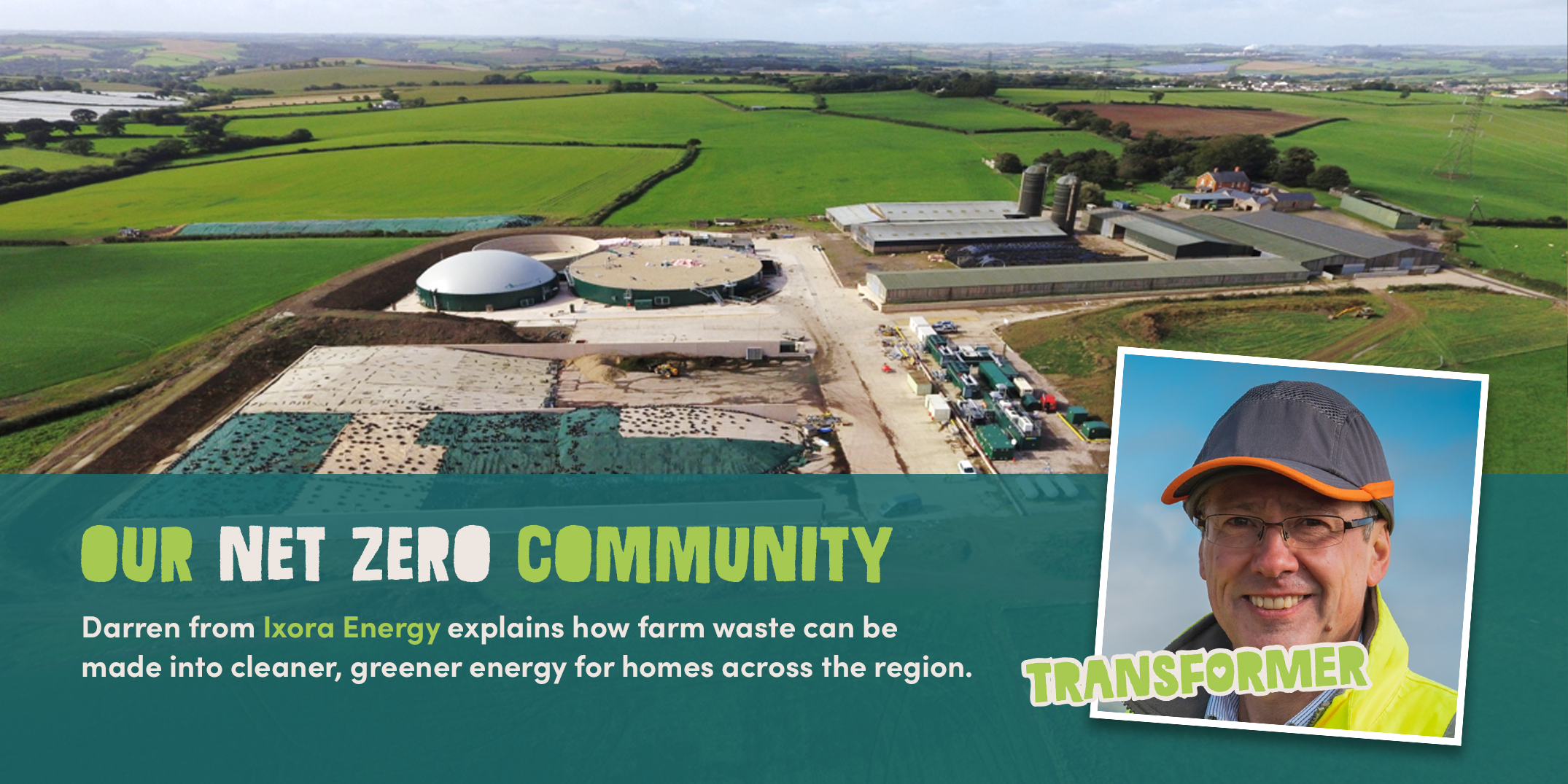 Ixora Energy are harnessing the power of anaerobic digestion, creating greener energy and tackling the cost of living crisis

We speak to Darren Stockley, MD of Ixora Energy, about how they're turning waste into energy...

"The renewable energy sector uses technology that is cutting edge and innovative, and therefore delivery doesn’t always go smoothly! This makes it an exciting area to work in," explains Darren.

Darren is originally from Coventry and has Freedom of the City, moving to Exeter to join Ixora Energy about 5 years ago. He enjoys living in the South West; "Exeter is a really nice city and Devon is a beautiful county. I spend all my spare time walking the Coast Paths and rivers of Devon... although my wife would argue that it’s just an excuse to eventually arrive at a pub!".

Darren joined Ixora Energy to deliver Anaerobic Digestion (AD) projects; "In the early days, it was all about coordinating a strong team to focus on delivery of the construction, commissioning, and operation of its facilities" Darren recalls. Nowadays, the emphasis of Darren and the Ixora Energy's work is on maximising output, so that they are able to deliver as much renewable energy as possible.

"I’m proud to be working in an industry that is contributing to the reduction in greenhouse gases and helping combat climate change.

Right now we’re at the centre of so many discussions about circular economies (local food and energy production) and moving to net zero carbon targets."

The Ixora Energy brand was established in 2017 with the aim of generating green energy for local homes and businesses, and currently operates 5 AD plants across the South West. These are predominantly farm-based and supplied by farm waste, manure, and sustainably grown crops. Bacteria in the digester break down the waste material, which produces biogas. The biogas is then extracted and used to directly supply local homes, or be to generate electricity that enters the National Grid.

The process is particularly environmentally friendly, as it recycles carbon that is already in circulation (compared to “natural” gas, which constantly adds more carbon to the environment).

"We believe that AD has a vital role to play in the achievement of net zero goals, and we’re keen to put our skills and experience to use in the fight against climate change."

Darren explains that Ixora Energy's ultimate aim is to produce green energy for local homes. In total, their plants provide over 12,000 homes with renewable energy every year.

The team also work closely with local farms and businesses as part of a circular economy model. Farmers are paid a fair price for the crops they supply to AD plants, and they also benefit from the by-product of the AD process, known as digestate, which makes a great natural fertiliser to replace harmful artificial fertilisers.

Engaging with their community is at the core of Ixora Energy’s approach. Their Gorst energy plant sponsors the Exeter Athletic Rugby Club, and their Condate biogas plant sponsored home-grown South Molton rugby player Emma Sing in her recent debut for England (can you tell they’re rugby fans?!).

They're also keen to educate people about AD by hosting site visits, from the local Young Farmers Club to an international group of Nuffield Farming scholars.

With gas prices currently at record highs as economies recover from the COVID-19 pandemic, combined with the impact of Russia’s invasion of Ukraine, Darren feels that harnessing the power of AD is more critical than ever...

"At the moment, we’re facing the dual challenge of the climate emergency and a cost of living crisis; AD can help tackle both issues".

Since AD is a local means of energy production, it also reduces the need to import gas, helping to protect households from international gas price fluctuations.

"It’s important that we all become more aware of our energy use - we should think about where our energy comes from every time we switch on a light or boil the kettle," Darren notes.

"There are small steps that each of us can take to reduce energy consumption too. You could save £250 a year in energy bills just by turning your devices off (not putting them on standby) and not leaving your phone on charge overnight!"